Express and connect appeared to have removed their gzip functions because they were too inefficient. Are there any reliable solutions to gzip with express-js currently?

Connect 2.0 has added support for compress() middleware based on the new zlib stuff with that has just come out in Node Core API.

You can make use of this in your express server by adding a dependency to connect 2.0 in your package.json file:

And then apply the following logic into your express app configuration:

Please note that this stuff is still pretty new and while I could get it to work locally, my Heroku cloud application complained about the dependency on Compress 2.x during the pre-commit hook when deploying via git:

Actually, I could get Heroku to deploy this by adding the corresponding engines section in the package.json:

And these are the results when using a http compression tester: 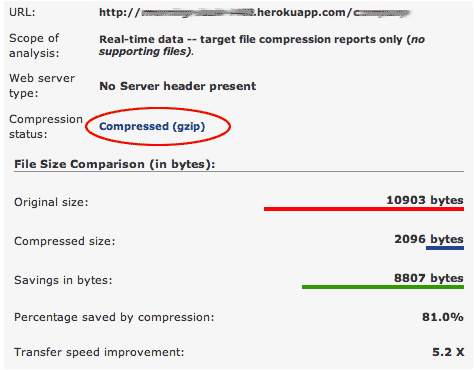 Hiya, if you are reading this now. Dont forget that the stuff above is only relevant to Express 2.0.

Express 3.0 and 4.0 use different syntax for enabling http compression, see post by gasolin just below.

EDIT for Express 4.0, compress become the separate middleware. So you have to install and import to use it: